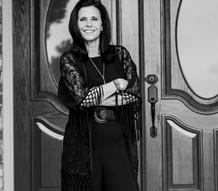 As a first-generation American of Italian descent, Connie was weaned on Chianti, Italian cuisine, and renaissance art. She grew up in her family’s famed Italian restaurant, “Casa D’Amore” and “The Villa Capri” in Hollywood, California,  She went on to intern and manage in restaurants for 9 years in Switzerland where she honed her knowledge of food and wine and dabbled in water color, pencil, acrylic and oil while traveling to many famous art galleries of Europe.

Art from the tip of a fork

Beginning in 1998, she opened and managed a succession of her own restaurants. “Laslow’s Broadway Bistro,” “Laslow’s Northwest” and “Malanga Cocina Cubana” quickly became established as benchmark eateries in Portland Oregon. “Laslow’s Northwest” was named one of “America’s Best Restaurants” by GOURMET magazine and THE OREGONIAN’S 2002 Restaurant of the Year. During this time, Connie traveled to Manhattan to represent Laslow’s at the James Beard House. She also further established herself in the industry by frequently judging at professional wine and food competitions. In 2003, she was touted by the OREGONIAN as having “...one of the Northwest’s best palates.”

Connie moved to Colorado to continue her food and beverage ventures. She developed and opened the unique concept of “TUTTI, a restaurant for everyone.” Then in 2012, after the successful sale of her first four restaurants, she developed curriculum for the Auguste Escoffier School of Culinary Arts in Boulder, Colorado then opened “Follow the Ruel,” a consulting, education, and specialty dinner company where she used her eye for art in the intricate design of food art and plate design.

​Art from the tip of a pen

In 2014 and 2016 after completing her first memoir cookbook, “Passions of a restaurateur,”  she made appearances on Food Network on “Guy’s Grocery Games” with Guy Fieri and “Chopped.”

Art from the tip of a paint brush

Art has been a big part of her life from plate presentation (food art), painting in water color, acrylic and oil to simply taking in the talents of other artists around the world. Now she devotes her time to discovering her art on canvas, focusing on oil medium.